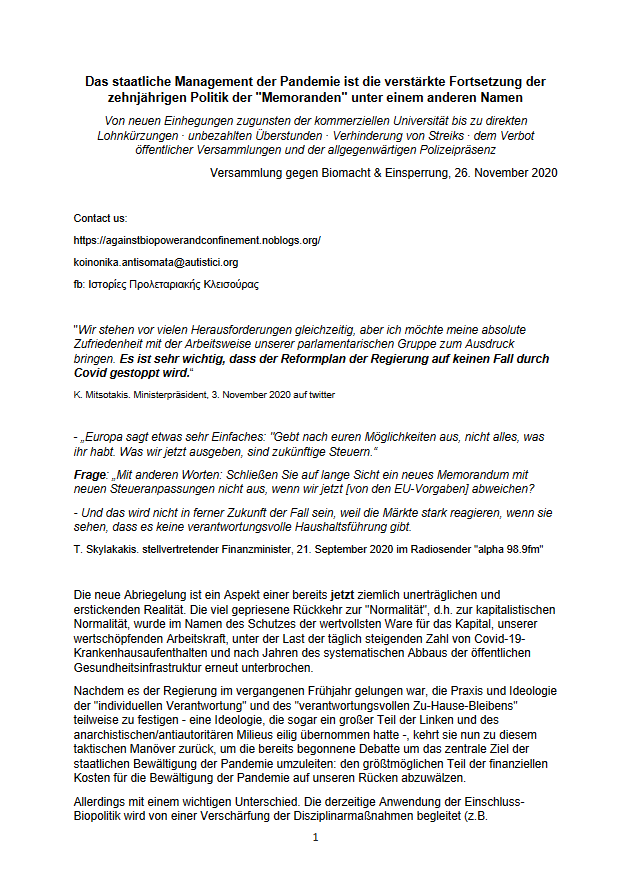 Translated in German by Laiens Club

[The original text was written in Greek in January 2022. It was being distributed, during the winter and spring, in protests of suspended health workers and of health workers –in general– against the NHS restructuring. Read the whole translation in pdf here.]

If someone was to follow the (mostly left-wing or anti-authoritarian) vaccine-fetishists’ boisterous monologues, they would certainly be impressed by their brazen, persistent efforts to conceal the fact that the state universal mass vaccination programs (which they vehemently support from the outset) unquestionably entail direct control over the collective proletarian body; be it in the workplaces or in spaces of consumption and social reproduction, through the imposition of a fluid and flexible apartheid-like system, in which the today’s (forcibly) “compliant” and “vaccinated” citizen can be excluded from spheres of social life at any moment, categorized as “unvaccinated”.

Within the digital, self-referential bubble in social media where this pro-vaccination faction is found busy politicking, exchanging predictable clichés –fundamentally threatening to the interests of our class–, our simple everyday experiences from the places of our wage exploitation disappear artfully.

Because the imposition of the capital relation –from the beginning and since then, constantly– entails both direct and indirect blackmail that has to remain hidden

Because the social causes of the pandemic –directly linked to the spiral movement of capitalist (re)production–  must also remain hidden.

Because the policies of internal devaluation, through which they have plundered the direct and indirect wages of workers for the last ten years, must be continued – to an even higher degree

Because the (weak) proletarian struggles against old and new techniques of discipline and control must remain minority, non-mass struggles, and thus invisible.

END_OF_DOCUMENT_TOKEN_TO_BE_REPLACED

This is the translation of a brochure of ours, originally written in Greek in November 2020. You can find the current translation in pdf form, here. 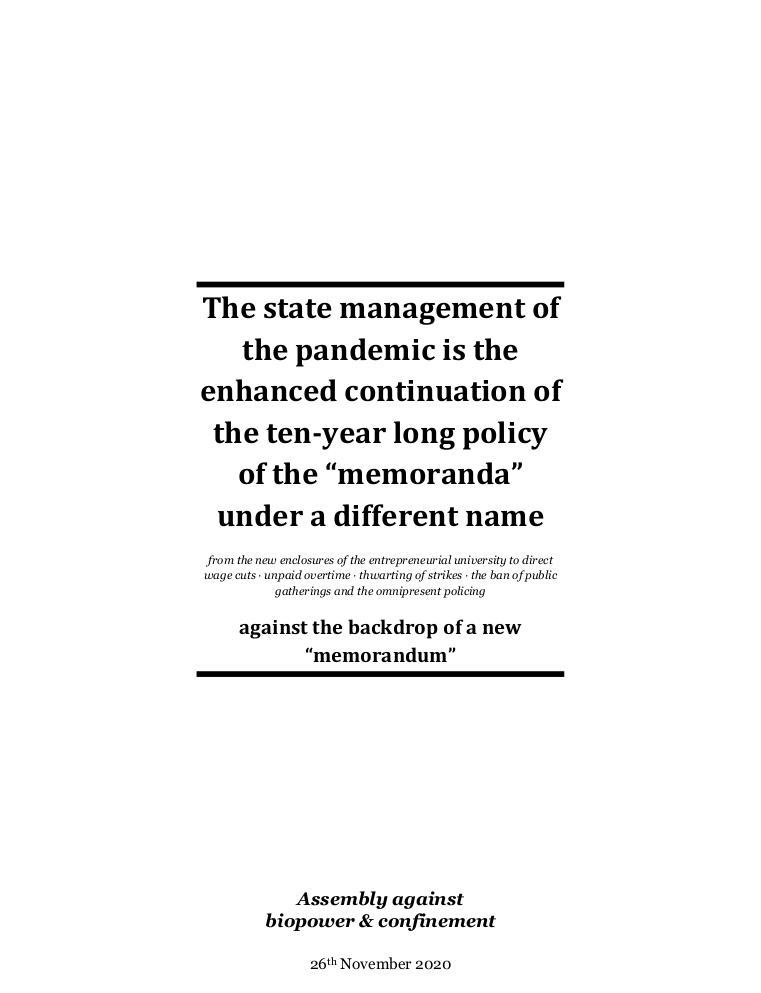 “We face many challenges simultaneously, but I want to express my absolute satisfaction with the way our Parliamentary Group is working. It is very important that in no case should the Government’s reform plan be halted due to Covid“

– Europe is saying a very simple thing: “Spend according to your means, not all of what you have. What we are spending right now, is future taxes.

Question: In other words, is it estimated that if we deviate now, a new Memorandum —in the long run, of course— is not ruled out, meaning new fiscal adjustments?

– And it will not be in the long run because markets react strongly when they see that there is no responsible fiscal management.

The new lockdown is an aspect of an already rather miserable and suffocating reality. The much-advertised return to “normality” —capitalist normality, that is— has been interrupted again in the name of protecting the most valuable commodity for capital, our value-producing labour power, under the weight of the daily increase of covid-19 hospitalisations and after years of methodical dismantling of the public health infrastructure.

The government, after succeeding in partially consolidating the practice and ideology of “individual responsibility” and “responsible stay-at-home-ism” last spring —an ideology that even a large part of the left and the anarchist/anti-authoritarian milieu had rushed to embrace— is returning to this tactical manoeuvre to divert the debate that had already begun around the central objective of the state management of the pandemic: to shift the largest possible part of the financial costs of dealing with it onto our backs.

With one important difference, though. The current use of the confinement biopolitics is accompanied by an escalation of disciplinary measures (e.g. doubling of fines and the introduction of a curfew after 9pm). Also, an escalation of repressive violence. This is exemplified by the simultaneous evacuations of the historical Polytechnic school in the Athenian city centre (which illegal immigrants had been squatting and the “milieu” had been using for its assemblies/public events) and the students’ occupation of the Rector’s Office of the National Technical University of Athens. And by the savage attacks on demonstrators on November 17th by thousands of cops, riot police and anti-terrorist squads. This repressive violence was launched because it is now difficult to portray the state’s choice of a lockdown policy as a supposedly impartial treatment of a “public health” issue, decided in a political vacuum and regardless of the, mostly spasmodic but nevertheless existing, responses against the hygienic tightening of social discipline.

END_OF_DOCUMENT_TOKEN_TO_BE_REPLACED

On Wednesday afternoon of 14th July, the people gathered in Omonia square began to move gradually from the square to Stadiou St. At first it seemed that there were no more than 1,500 people in the square, but, as usually happens after a demo has started, it was revealed that they reached 4,000-5,000. A lot of youth, families, well-off people but not necessarily posh, a mix of shopkeepers and workers. (According to some information, the initial call was made by a right-wing Facebook group called “Shops without a graft”). People did not seem to have much experience of demos. However, the well-known crackpots were not present (priests, nuns and others who had participated in the demos against the Prespa agreement, had already gathered in Syntagma Square and were waiting for them). You could see some muscular chavs, a few Greek flags (you could not see more than 10) and 2 improvised spray banners (“No to mandatory vaccination, we want freedom”). From the beginning, there was excitement among those gathered about the size of the crowd (many took selfies with Omonia in the background, so that one could see the main body of the rally), enthusiasm expressed at the beginning of the demo with massive applause and shouting, but then there was no particular excitement: 2-3 basic, nationalist, “anti-fascist” slogans (“Greece, Greece”, “fascist Mitsotaki, resign!”, “Down with Mitsotakis’ dictatorship”, “Keep your hands off our children”+ the national anthem). It would not be an exaggeration to say that we witnessed the birth of new right-wing and far-right mini-parties, a revolt on the right, on the basis of an existing social issue that large sections of communists and anarchists refuse to recognize as such. In the Syntagma square next to the Christians there were the Pro Patria neonazis,  lined up in military style. At the lower part of the square there was a small crowd gathered under the banner of Contra Dystopia and 4 other democratic, anti-fascist organizations against “discrimination and bioterrorism”. Here they describe the gathering from their own point of view and how they were attacked by the fascists of Pro Patria

END_OF_DOCUMENT_TOKEN_TO_BE_REPLACED

What’s happened? At dawn this morning [i.e. 18/5/2010] in Bologna, Italy, some workers and precarious workers who refused to be exploited and swindled by their shit bosses were woken up by police officers, giving them notice of these precautionary measures against them: five were ordered to leave Bologna and one was banned from approaching their ex-workplace and ex-bosses. A further 13 workers have also been charged. END_OF_DOCUMENT_TOKEN_TO_BE_REPLACED 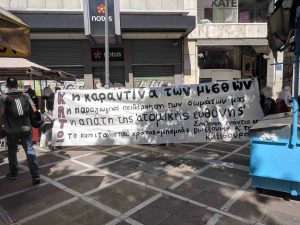 Οn May Day, about 3,000 people marched in an …empty city, still in lockdown. The composition was mainly anti-authoritarian and leftist, with some small unions, too. Our assembly was part of demonstration. On our banner was written:

Today (15/04/20), The Assembly against Bio-Power & Confinement carried out a mass counter-information action in support of workers in different neighborhoods at the center of Athens. Taking all necessary precautions, we found ourselves in the streets with working people of our class, discussing and sharing common fears and concerns. We demonstrated in practice that solidarity for us does not mean “everyone in their private cell” and “everyone for himself”, like the state and its personnel attempt to convince us every day. We discovered with joy that we are not alone in this situation, that the proletarians didn’t fall for the fairy tale that the pandemic is a “matter of individual responsibility”, or that the state and the bosses are putting up a fight for our own good. So, from our point of view, we are already setting the stage in order for the motto “we will deal with you later” to not be just a figure of speech.Below is the text of the action and some photos

WE ARE TOLD TO ENTER QUARANTINE, BUT:

-The ones among us working in super markets, delivery services, pet shops, pharmacies and hospitals have not entered quarantine. We work in health-devastating conditions, forced to work overtime, some of us with lower wages and without the proper means of protection against the virus.